For more than three hundred years the old gibbet has stood at the crossroads, its stark outline silhouetted against the sky.

To the villagers of Shillingham it is a local landmark, a reminder of the sterner justice of a bygone age - nothing more.

So why does Michael Lambton feel a sudden shiver of apprehension as he gazes across the harsh Northumbrian landscape in the dusk, and why are the children Karen and Graham drawn repeatedly to play around the gibbet, as if called by a silent voice? Why does Frank Warwick place fortnightly offerings of food and fuel at the crossroads, and why, when a new plan for a motorway means the removal of the gibbet from its site, does he become almost insane with fear and desperation in his frantic efforts to stop the development?

A dark and terrible evil slumbers beneath the gibbet. Slowly it is awakening, and in its mind burns revenge against mankind. Michael Lambton, in his lonely isolation at Split Crow Farm, has sensed its presence, but only Frank Warwick knows the true nature of the horror that could engulf, not only Shillingham, but the very fabric of existence, and he is powerless to halt the advance of the bulldozers. Soon, soon, it will be too late. At all costs, he must pass on to his daughter Christy the dreadful knowledge that has haunted the Warwicks for three hundred years. With Michael Lambton to help her, she may be able to challenge an evil that seems impervious to attack.

Stephen Laws is possessed of a rare talent which has already attracted millions of readers to his previous books, Ghost Train and Spectre, both masterly explorations of supernatural horror. In The Wyrm he probes the fragile core of our emotional armour, bringing us face to face with our deepest fears.

STARBURST Horror which is both truly frightening and dangerously unpredictable. A brilliant book, full of characterisation , horror, and a creature so frightening that most others pale beside it.

THE BOOKSELLER Laws' remarkable talent for credible horror has already brought comparison with the best selling masters of the genre. This riveting and haunting story confirms his place.

SAMHAIN Laws achieves a truly oppressive atmosphere as this awesome pariah is unleashed on the town. He is at this time unquestionably our most promising genre writer.

FEAR An excellent, breathtaking, morbid read.If his first novels vibrate with dread, then his latest drips it from every page.

Stephen Laws, freezing to death in mid-winter at Winter's Gibbet, just outside Elsdon in Northumberland. The gibbet was one of the inspirations behind the novel. At the time the photograph was taken, there was a tendency for the wooden head hanging from that gibbet to be stolen by local rascals - so the parish Council had a special budget head for replacement heads. 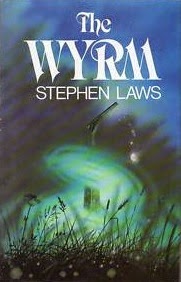 Cover for first hardback edition, published by Souvenir Press. The gibbet as central 'feature' would appear in one form or another on most of the subsequent publications both here and abroad; with one exception - J'ai Lu's French edition (see later). The artist isn't credited by Souvenir, but if you're still around and want to get in touch, please do - and I'll be more than happy to give credit where credit is due. 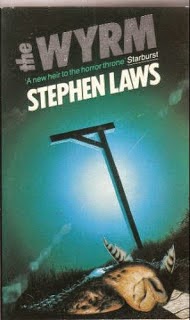 First paperback cover for the Sphere edition, with another great painting by an uncredited artist. Once again, I'm happy to give credit if someone gets in touch. I particularly like the dead owl lying in the foreground, which references a sequence when all the terrified wildlife trying to get out of the cursed, sealed-off village are killed by the Wyrm's deadly and impenetrable fog-barrier. 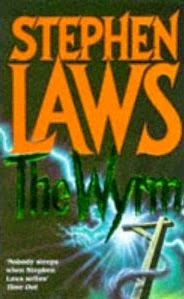 Cover of New English Library's paperback re-release, with painting by Steve Crisp, who also produced paintings for the re-releases of GHOST TRAIN and SPECTRE.I was so enamored of Steve's work that I bought all three paintings, and they're on my study wall. THE WYRM painting had to be reformatted for the text on the front cover, and unfortunately the horde of approaching zombies featuring prominently at the bottom of the painting can't be seen on the book cover itself. 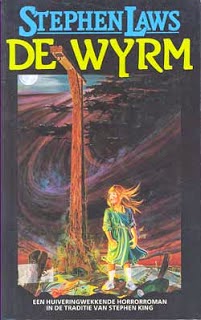 Dutch edition, with cover painted by Gerard Schriemer. Love the little girl in the foreground, very much like my own daughter when she was that age.This is another one which has been framed and hangs on the Laws study wall. 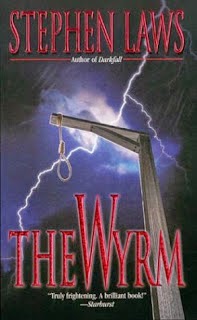 Cover of the Dorchester/Leisure paperback edition in America. 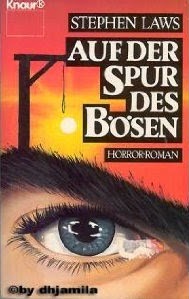 German edition, retitled 'On the Trace of Evil/On The Track of Evil'. Surrealistic painting by Marion and Doris Arnemann.

PIECES OF MARY: Laws maintains a feeling of dread and horror throughout, and some excellent manifestations of the creature make this a real page turner. 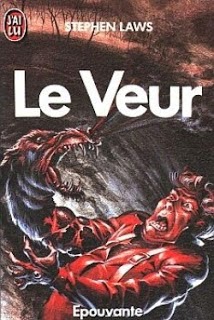 Wonderfully lurid cover for the French paperback edition released by J'ai Lu. Unlike some of the strange representations that have appeared on other international editions of my novels which seem to have no relation to the events being depicted in the narrative, this is based on a scene that actually takes place when villainous Billy Rifkin is possessed and metamorphosed by The Wyrm. Artwork by Matthieu Blanchin.

MAKING MONSTERS by Stephen Laws. (An article for Dorchester/Leisure Books - who published the novel in the States).

In the North of England, there's a small village called Elsdon—and on its outskirts, on lonely hills, there stands a gibbet.

I first encountered it many years ago, and discovered that it was known as Winter's Gibbet. In 1792, William Winter (and his accomplices, Jane and Eleanor Clark) were hanged there, having been found guilty of the murder of one Margaret Crozier. Winter himself remained hanging there until he rotted. For more details, see - http://www.rothbury.co.uk/around/winters_gibbet.htm

The gibbet is a remarkable sight. If you head up into the hills by car, pass through Elsdon, you suddenly crest a hill—and there it is. A stark reminder of the past. I knew that at some stage I'd end up writing about it, or something like it. But for many years, my research notes and details remained on file—waiting for that further inspiration.

At some stage in the early stages of collating notes for that new novel, I was reminded of a North of England legend about a creature called The Lambton Worm. The monstrous creature laid waste to the countryside until the young heir to the Lambton estate returned from the Crusades and killed it. In some versions, the "worm" is a serpent and in others, a huge reptile.

Looking into the legend a little further, I discovered that in the North Of England—indeed throughout the United Kingdom—there are dozens of such legends about man-eating monstrosities called worms, or more precisely in old English—wyrms. I was also fascinated to discover that the word could mean "dragon" or "evil spirit," and those legends are many and varied, with wyrms of all shapes and sizes behaving in all kinds of anti-social ways.

It was then that I decided I could use just the word, the fact that these legends were so prolific in English mythic history—and go on to create my monster. Part of my research drew me back to author Bram Stoker's novel The Lair of the White Worm, and in the realization that he too had drawn on the same legends and created something distinctively his own from that raw material, I knew that I was on my way.

Three other key factors suddenly clicked into place. I read that in some folklore, a stake is driven through a vampire's body not to destroy the heart, but to actually keep the thing pinned down in its grave. Also—that in some parts of the world, suicides were buried at crossroads so that if they came back as vampires, they wouldn't know which road to take and would be stuck there. Tying those things into my strong desire to also write a novel about the sealing off of a small community from the outside world, and its struggle against a monstrous threat, I suddenly remembered the gibbet at Elsdon. What if that gibbet was actually performing the same function as a kind-of giant wooden stake? And what would happen if that stake was removed...?

That's when everything started to come together.

And the result is—The Wyrm.