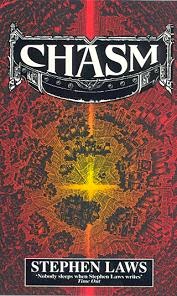 An ordinary town full of ordinary citizens going about their everyday business.

Then the earth tremor hits. Glass shatters, concrete crumbles, buildings fracture and collapse as everything disappears beneath choking clouds of dust.

The few shell-shocked survivors emerge to be met with a terrifying, impossible sight. Most of Edmonville has disappeared into an enormous crevasse; the semi-demolished buildings which remain are perched or a series of peaks, crags and pillars of stone - many of them separated from each other by hundreds of feet, and a perilous, bottomless gulf below.

Without electricity, heating or water, the few remaining citizens of Edmonville wait for rescue - which doesn't come. As starvation threatens, the best and the worst of human nature come to the fore in the struggle for survival. Their only hope lies in their being able to make contact with one another.

Then, one by one, people start to disappear without trace ...

What exactly has happened to Edmonville? And who - or what - lurks in the hideous Chasm below? The macabre imaginative genius of Stephen Laws is at its best in this phenomenal tale of an ordinary town caught up in extraordinary circumstances.

DAILY MAIL:  An awe-inspiring study in desperation and the supernatural, with excitement lasting without respite to the final page.

STARBURST: CHASM is author Stephen Laws 10th novel, and to mark the occasion he has delivered his most powerful, most commercial and most engaging work to date, and has securely cemented his reputation as the most exciting British Horror author working today. I have not been as thrilled and as moved by a book for a great many years. I missed stops on the train because I was reading it. I found it hard to put down and, once I had, I only wanted to pick it up again. Laws has created a nightmare scenario and peopled it with a rag-tag bunch of survivors who must overcome all odds to protect their own. An earthquake unexpectedly hits the small town of Edmonville. The ground shakes and shudders, buildings collapse and great gaping cracks open in the earth. Plumes of dust and debris surround the town and, in the aftermath, the survivors emerge to see what remains. Shockingly, the rest of the world seems to have vanished and selected remains of Edmonville are lying, scattered, across numerous pillars of rock and stone, between which is an apparently bottomless, inky black chasm. The sky and the horizon is simply a grey unearthly blank. The survivors marshal their resources and wait for help to arrive, but help is not coming, as Edmonville no longer exists in the real world. It has been pulled through the fabric of reality and now resides in the domain of The Vorla, an intelligence that manifests itself as a fluid and mobile tar-like substance. The Vorla manipulates the dead bodies of Edmonville's residents and uses them as weapons against the survivors. It is intent on feeding off their terror and confusion and attacks when they least expect. What The Vorla is, where Edmonville now resides, and the struggle by the likeable group of survivors to simply make it through each day unscathed is the tale told in CHASM. It is also about human nature, love and survival. It is about man's inhumanity to man, terror and despair. It is without doubt the best Horror novel I have read for ages. Laws manages to engage the reader on an emotional level, which both exhilarates and derails. As each horror befalls our group of survivors, so the novel gathers momentum until the events take a turn for the worse - if that were possible. The stakes are raised not only in the battle against the wily Vorla, but also against another group of survivors, ones who view human life as being totally expendable...

CHASM is a huge, rolling, blockbuster of a novel. It would make an incredible film or television mini-series, and deserves to be snapped up for this purpose immediately. It is far more than just another Horror novel. It is a story of power and impact, which resonates with human emotion and spirit. This is seriously good stuff. If you want to read one of the best and most entertaining novels of the year, then seek out CHASM. You won't be disappointed. (Starburst magazine rating 10/10).

SHIVERS: If you only read one horror novel this year, then make it CHASM by Stephen Laws. From his very first novel, GHOST TRAIN, Laws has always delivered the goods, and with this, his tenth, he delivers them in spades.

The small town of Edmonville is hit by an earthquake which destroys property and kills many of the residents. When the shock waves subside, the survivors emerge into a grey and bleak world. Edmonville no longer exists in reality and has been dragged through into a parallel dimension. The remains of the town are perched atop craggy spires of rock, and between the crags is a vast and apparently bottomless chasm.

The survivors form a bond and try to make sense of what has happened. Then the dead come back to life and attack the living. This is the work of The Vorla, a formless and deadly entity which lives in the chasm. It feeds on the terror and despair of the humans and will stop at nothing to generate it. It is wily and manipulative and is determined to wring every last emotion from the survivors.

Laws uses this scenario to explore human relationships and to try and understand how people can come through under immense pressure. His characters are likable, and as they try to come to terms with the horror that has befallen them - and that help is not going to arrive - so too does the reader. The book pummels along to one climax after another, and just when you think that there are no more twists to be revealed, Laws pulls off a cracker and pits our heroes against not just The Vorla, but against another group of humans, who have embraced The Vorla and its ways. It makes for a nerve shredding climax.

CHASM is easily one of the best Horror novels I have read recently. Have a look for yourself and see why Stephen Laws is one of the most exciting and original writers currently working in the field.

BRADFORD TELEGRAPH & ARGUS: One of the most descriptive and terrifying books I have read, this is pure horror. It starts with two earthquakes, after which there is darkness. A whole town has disappeared into a bottomless ravine. The few survivors realize that they are cut off from the rest of the town, and then the horrors begin. Something is making the dead walk and there is no way out. What is it that comes out of the chasm? In a frightening and totally believable tale, this author makes true evil come to life.

EVENING MAIL: The author's best outing yet. A law unto himself.

NEWCASTLE EVENING CHRONICLE:   A master of horror. Definitely not for the squeamish. If you like your novels scary but believable, you will love this one.

The Crystal Queen has a little chat with Stephen Laws about Chasm...

Stephen Laws takes the research aspects of his work very seriously, believing that to produce a really effective supernatural horror-thriller, the down-to-earth everyday aspects of a novel should be rock solid to give the supernatural "intrusion" greater effect. In the past, this research has led him into some interesting situations; climbing an elevator shaft on a maintenance inspection for Darkfall, scuba-diving (and nearly drowning) in a Stockport canal for Macabre, behind the wheel of a runaway bulldozer for Daemonic. For Chasm, in which an English town is devastated by an earthquake, Steve was actually allowed to participate in the destruction of a town centre! The demolition experts Bradley Hall and Scotdem were only too pleased to give Steve as much information as he needed, even bringing him in for the actual demolition work itself.

"Chasm is my tenth novel," says Steve. "As such, I wanted it to be my 'block-buster'. It's actually been about two years in creation, and has given me a chance to pull all the stops out, with guest appearances by The Four Horsemen of The Apocalypse; The Cherubim (nasty little naked angels with sharp teeth who hunt in packs and can tear you to pieces in seconds); an army of the living dead; a feral tribe of homicidal, cannibalistic survivors bent on the destruction of anyone over the age of sixteen, and The Vorla: a living, crawling black sea composed of everything evil that mankind has ever experienced. And to add to the fun, I even got to blow up a shopping centre in person!... all for research purposes and all in the name of art!"