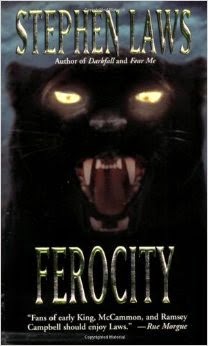 HORROR READER Ferocity draws on horror's history. I was particularly reminded of the style and worlds of Cornell Woolrich. Both Woolrich and Laws share engaging writing styles; incorporating the worlds of crime and horror. Stephen Laws' prose generates suspense with exquisite simplicity.

CREATURE CORNER This is a wonderfully involving and truly frightening tale that brought to mind the ancient Grendel story that so thrilled me as a child. Mr Laws is a masterful writer of great intensity and immediacy, drawing the reader into the narrative from the opening scene to the last. Beautifully conceived and beautifully wrought, this is scare fare of the highest order - perfect for a cold winter's night.

JOE KROEGER Stephen Laws breaks the traditional horror mould with his new novel Ferocity. Flawlessly blending the rich atmosphere of a finely crafted horror story with the action packed ride of a well thought out thriller, Ferocity is a novel that grabs a hold of your every last nerve until well after the final page is read. A novel that takes off like a shot and does not let up until the final pages. Laws' writing is tight and rich with atmosphere making this a pleasurable reading experience as your nerves go into overdrive. His prose switches effortlessly from the quiet horror sequences to the all out action giving the reader a smooth ride through the nerve-wracking story. With the fusion of horror and suspense, this novel is sure to satisfy any lover of a great thriller as well as the most discerning horror fan. I highly recommend getting your hands on Ferocity by Stephen Laws to experience a fresh outlook on the classic horror novel.

The Ferocity of Beast and Man by Stephen Laws

Although the idea that Big Cats are prowling the forests and mountains of America isn’t such a ‘big story’, since puma and mountain lion are an indigenous species to many regions of the States – the idea that they, or something like them, may be prowling the English countryside is a recurring ‘big story’ in the UK – because there are no indigenous Big Cats, and they’re just not supposed to be there.

And yet, newspaper reports have appeared regularly here over the years of a decidedly un-English species; which occasionally appears from nowhere to take livestock from local farms – and also scares the hell out of fell-walking tourists.

The most famous mystery-cat of all, which makes regular appearances not only in the English local press but also nationally – is The Beast of Bodmin. This predatory Big Cat (or Cats) - which some say is a puma, others a ‘black leopard’ to use the proper term – is claimed to regularly savage livestock in and around Bodmin Moor in Cornwall. Of course, there’s an ongoing argument about whether or not there is such an animal, or whether – like the infamous crop circle phenomenon – some mischievous locals are involved in a deliberate hoax. But although the Beast of Bodmin gets the (ahem) lion’s share of press coverage when it appears out of nowhere, takes a sheep, scares the tourists or takes a bite out of a farmer – there are many other instances of other such appearances and reports all over England. (‘The Puma of Durham’ for instance – not far from where I live in the North East of England. Of which, more later). Of course, really hard and definitive evidence hasn’t been forthcoming over the years and one of the big questions that remain unanswered is – why haven’t these ‘reports’ and rumours been confirmed or dispelled? Could it be that these animals – if they exist – have some kind of power of camouflage that keeps them one step ahead of the humans who have hunted them?

I guess I’d always wanted to write something that would feature one or more of these mysterious English Big Cats – and that desire was further fueled by a visit to Hound Tor on Dartmoor. The ‘Tor’ is a crag of rock on the bleak, mysterious and beautiful moorland that inspired Sir Arthur Conan Doyle to write The Hound of the Baskervilles. However, I didn’t want Ferocity to just be a Big Cat of the Baskervilles. I’d intended to write a novel that was part-thriller, part-character study, part crime-novel and answering all the ‘What ifs?’ that had occurred to me in the process of outlining the novel – and with the Big Cat phenomena interwoven through the fabric of the story literally, metaphorically and, of course, physically.

Physically? Well – that was the first research aspect that had to be addressed. If I wanted a core of reality to the novel, I had to find out for myself if there really was something to the Big Cat phenomena. If I wanted to create an edge-of-the seat, hard-edged ‘crime thriller’ with just such an animal posing an added threat to an already dangerous and desperate fictional situation, it seemed like a good idea to go down there in person and see if there was anything in these ‘true stories’.

Which is how I found myself on a southbound train, heading for Bodmin Moor in Cornwall. On the following day, I had a meeting at Newquay Zoo with the then Managing Director, Mike Thomas - an acknowledged expert on the Beast of Bodmin Moor. He showed me a great deal of evidence to support the case for a pride of Big Cats (probably pumas, panthers or ‘black leopards’) living wild down there. There have been interesting disagreements with the Ministry of Agriculture over the years – and there’s a view held by some that there’s an official refusal to acknowledge the existence of Big Cats in the wild, because if they were acknowledged, the government would have to cough up compensation to farmers for livestock that has been killed over the years.

While I was chatting to Mike, he took a telephone call to say that a horse on a farm in a village called Troon had been attacked by something - would he investigate? Mike looked at me, raised his eyebrows in enquiry– and suddenly, I was part of the official investigation. I was Land-rovered up to the remote hamlet with zoo worker Les Bishop, another expert.

The farmer showed us the horse, which had some pretty convincing slashes on either side of its neck. Four straight horizontal gashes (which the vet couldn't explain, although he dismissed barbed-wire and sadistic kids playing pranks). Also, the horse's coverlet was slashed, and its back legs clawed. The frantic animal had jumped the fence and galloped two miles before being caught again.

Surprise, surprise. There was a television camera crew waiting up there for us. They'd got wind of the fact that a novelist was on a research trip - which presumably made it more newsworthy for them. So, they interviewed me, while an icy wind nearly froze everyone to the spot. After they’d interviewed the farmer, another guy I’d never seen up until that moment suddenly emerged. I guess the phrase ‘local character’ might apply. He said that he'd seen the 'Beast' two years ago. He had lived in the same remote farmhouse without electricity or gas for over forty years.

Suddenly, Les gave a yell and pointed out some tracks he'd found in the field - bloody great prints which looked like ... well, like a big cat. He took a plaster of paris cast for analysis, and we headed back to the zoo - the local television people telling us that they might or might not use it on the six o'clock news, depending on the print findings.

Les and Mike found that it compared to a large panther print they'd taken at the zoo, but there was a human boot mark on the upper edge - which meant they couldn't give a complete confirmation.

So, after another lengthy 'research' meeting, I thanked them all and was driven back to the pub at St Austel where I was staying. At six o'clock, I sat with my pint of beer at the bar, underneath the television; thinking that if anything came at all it would be a one-minute job shoved in at the last moment after the real news of the day. But it must have been a slow news day in Cornwall that day because, as the news fanfare music began, the headline was announced: "Big Cat Hunter Novelist from The North has Close Encounter with the Beast of Bodmin!" And there I was - on a remote hillside, freezing to death and adding my own views to the legend of whatever it is that prowls Bodmin Moor.

Just days after the journey back and - closer to home - I’d arranged another trip to the Derwent valley to meet up with police Sergeant Eddie Bell, who's also an acknowledged expert on the Durham Puma - another Big Cat or Cats, which are supposed to be roaming the wilds of the North of England.

Eddie has an animal sanctuary in Whittonstall. Lynxes, Vietnamese pot-bellied pigs, eagles - you name it – and he pretty much corroborated everything I'd learned from the Newquay people.

So – although I didn’t actually see a Big Cat on my trip to Bodmin Moor, and there was no human blood spilled during that research trip (although a horse in the village of Troon shed more than a little), I saw enough evidence to support the fact that they’re there (and elsewhere in the British Isles), and heard a pretty convincing theory which suggests that … well, that the possibility of such animals living wild in England isn’t as far-fetched as some would have you believe.

That theory is outlined in the novel.

I said that no human blood was spilled during my research trips for Ferocity.

That’s not quite true.

While I was visiting Sergeant Eddie Bell and his animal sanctuary in Whittonstall, I’d only just stepped through his front door – when something small and hairy jumped onto my shoulder and scampered around my neck. He said: "Don't move! It bites!"

So I bloody well didn't move. I was convinced it was a tarantula. He leaned across, and grabbed whatever was there.

It was a marmoset.

But he was right.

It took a chunk out of his finger before I left.

So – a small spilling of human blood during that visit, then.

But in Ferocity, the novel – I suppose I should point out that there is a great deal more spilling of blood, both animal and human. There is also a great deal of fear, and terror – and death.

And face to face encounters, not only with something out there that shouldn’t by rights exist – but also with the bestial and ‘animal’ violence that lies so close to the heart of humankind.

When it comes to actual ferocity, it's the old, old story - which is the worse: Beast – or Man?