When Sheraton's gang burn his wife and kids to death, Eddie soon learns the meaning of hate.

And that's how the prison psycho transfers his awesome power to Eddie. A power that Eddie reckons he can control. A power that will enable Eddie to put the frighteners on Sheraton...

STARBURST A new heir to the horror throne... Laws' strength lies in building atmosphere, suspense and tension. The Frighteners is unrelenting and a powerhouse of suppressed emotion

ORACLE The bloodletting is plentiful, blatant and graphic and the end result is a compulsive read.

NEWTOWNWARDS CHRONICLE Laws creates a vision of evil so powerful that it surges forward in a shattering crescendo of blood-curdling terror, sweeping the reader to its explosive climax. 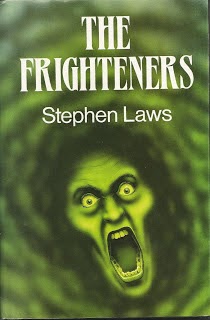 First hardback publication by Souvenir Press, artist unknown. This was my third and final novel with Souvenir Press, and my attempt to push the boundaries; but also contextualize extreme horror sequences within the narrative. At the time, I was railing at the use of horror purely for horror's sake - and whereas on the surface this is a supernatural gangster horror novel (as someone at the time described it: 'Get Carter' meets 'The Exorcist'), there's a hidden but strong political sub-text in the novel which also reflected my anger at what was going on in English society at the time. Not so you'd notice overtly - since I don't write 'message' fiction; but I was bloody angry back then.

Apologies for the poor resolution of the picture, but this interior artwork which appears at each section of the novel (in this case, Part One: Carve-Up ) is the work of artist, Ray Laws - my brother.

Shameful nepotism, I know. Ray now co-runs an advertising/graphic realization company in Australia and has been responsible for rendering ideas and artwork on lots of famous goods and products, which I can't list here because that would be taking nepotism a tad too far!


MANCHESTER EVENING NEWS If you like NASTY - then this one is for you.

BOOK REVIEW The writing is truly horrible - indeed, it makes your flesh creep as victims succumb to their fate. The Frighteners is definitely not a book to read just before you go to sleep - but for lovers of horror it's a must. 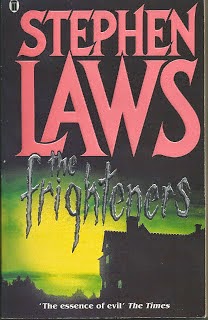 First paperback publication by New English Library (Hodder and Stoughton). Terrific painting for the cover, representing 'The House on Lime Street' which features in the novel (and is one of the sub-headed sections in the book). Lime Street is an actual location down by the Ouseburn in Newcastle upon Tyne, but nothing like the location painted on the cover. Another bit of artistic license on my part, using real locations for my fiction. NEL also used my brother's interior artwork for each section, as per the Souvenir Press edition, but unfortunately credited it to one 'Ray Lewis' rather than 'Ray Laws'. I'm happy to put the record right here! 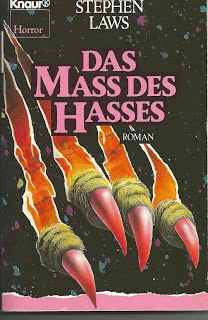 German paperback edition - ('The Dimension of Hatred'). Published by Knaur, and with artwork by Klaus Thomas. Klaus was also responsible for a superb painting, used for the second paperback publication of GHOST TRAIN (again by Knaur, which I'll be posting in that section in the new future). Given the slightly Hammer-Horror aspect of the cover, it's probably worth mentioning here that the character of Sir James Callender in THE FRIGHTENERS is based, purely physically, on the demeanor of the superb actor Andre Morell - as 'Sir James Forbes'- in one of my very favorite Hammer movies: THE PLAGUE OF THE ZOMBIES (for which I wrote an in-depth appreciation in CINEMACABRE and Dick Klemensen's MAGAZINE 'Little Shoppe of Horrors'). Not a lot of people know that ... 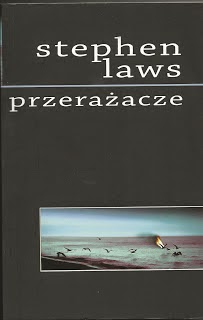 Recent (2011) publication of THE FRIGHTENERS in Poland. Elsewhere on the site, you'll find foreign edition covers where the artwork doesn't seem to relate to anything that's going on in the novel. Sometimes, the effect is very odd - but at other times (such as the Italian edition of SPECTRE - I FIGLI DELLA NOTTE - with the woman walking on the beach, her hair on fire) it can be very pleasing. Such is the latter case here, with a tranquil beach scene - and a seagull going down in flames. The fact that the artwork has been minimised in this way seems to make it so much more subtle. Perhaps 'subtle' is not a word that you can apply to the ultra-horror aspects of THE FRIGHTENERS (despite the sub-textual stuff), but I hope the cover appeals to Polish sensibilities.