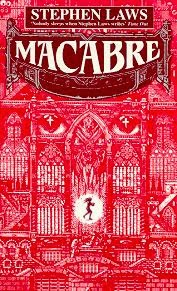 MACABRE is a terrifying blend of modern urban paranoia, nightmarish visions, and supernatural dark fantasy, where the contemporary issue of homelessness and missing persons takes on a new and altogether more chilling dimension.

More people die at four in the morning than at any other time.

It's 3.30 am. It's starting to rain. And cabbie Tony Dandridge is cruising the dark streets of the big city. Is it his imagination, or do there seem to be more lost souls wandering the alleys and sleeping rough these days? Suddenly he catches a figure in his headlights. A desperate young woman and her baby, flagging him down. Tony's about to pick up the first fare of his shift. And the last.

EVENING TELEGRAPH Great contemporary British horror writes are few and far between - James Herbert, and that's it. Now another has emerged from the shadows. Stephen Laws is hardly a newcomer - Macabre is his sixth novel - but the quality of this modern tale of urban terror reinforces his growing reputation and pushes him into the first division of doom merchants. The book is a terrifying account of street life as seen by those who experience it at the sharp end - the homeless. They are the prey of a religious cult whose leader has struck a deal with the dead to ensure his own eternal life. Bedtime reading it may not be - compelling reading it certainly is

STEPHEN GALLAGHER At the forefront of his field, Stephen Laws shows us horror's most valuable function - the use of great darkness to point up and define, in spectacular fashion, that which is truly humane

DARK ASYLUM Stephen Laws, the real thing. For me he's the classic horror writer. His work operates as a salutary reminder to the rest of us, rooted as it is in the traditions of the genre: back to basic in the truest sense, it draws its strengths from his deep knowledge of the forerunners who first broke this ground, while remaining totally contemporary and always surging forward. Neat trick if you can do it; and Laws is one of the few who can. (Macabre) ... is harsh, in-your-face horror ... strong meat, as it should be. Kept me awake late reading it, and then awake some more re-living it when I wanted to be sleeping

BOOK WORLD (Maureen Willis): This horrifying new novel from the best-selling author of The Frighteners, Darkfall and Gideon combines stark realism and unimaginable horror to devastating effect. You won't be able to put it down - but after you're finished you may never be able to walk a dark city street again ...

DAILY MAIL Strong characters, grippingly addictive plot, and a mountain of supernatural bloodshed and mayhem - all the right ingredients for a top-notch tale of terror.

THE JOURNAL This is a gut-wrenchingly tense and nasty horror story but with a lot of humanity and social conscience.

SAMHAIN Laws writing style more resembles the thriller mould than any horror writer and it is this that makes his books so entertaining. Mixing social commentary with out and out Gothic horror Laws has created one of the must-read books of the year.

CRAIG CABELL (A FEAR OF RATS) The balance between fantastical horror and real-life horror is what all good horror writers should strive to achieve. Some of the greatest horror novels in the last decade of the 20th century had their feet firmly planted in reality: (including) Stephen Laws' much under-estimated social statement. 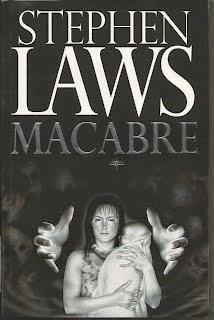 (The above cover is from the first UK hardback edition, with painting by Mark Taylor, after a design by myself)

STARBURST How all the elements fit together into an exciting and coherent adventure is a joy to behold. Laws lays the jigsaw pieces before us,and slowly moves them together. Piece meshes with piece until a picture about the reincarnation of an ancient evil forms and then,with the placing of the final elements, the novel is confirmed as a masterpiece of storytelling and characterization.Laws keeps it all under control,and we are involved in the story from page one onwards.The imagery of dank, dripping streets, silent canals and desolate inner-city deprivation is skilfully meshed with themes of gang warfare, drug abuse, racial tensions and the constant threat of the unknown. 'Macabre' is an excellent novel and a gripping read.Another classic from one of the top names in the field. 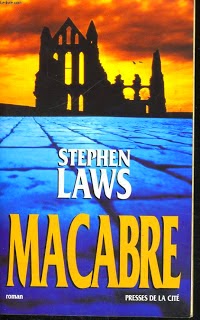 TRASHOTRON (Rick Kleffel) Laws delivers well-written, truly terrifying scenes of supernatural menace and mystery. The prose and plotting join together seamlessly to create a believable netherworld, contained within our world, where the more-than-human and the human, the supernatural and the everyday, give both the despicable and the endearing the power to change lives - or end them, slowly. Laws is a master of carefully revealing the exact nature of his plot, of casting shadows that loom larger then the reader's reality, eventually subsuming it.He's obviously learned from Lovecraft that sometimes, less is more, and from the splatterpunks as well, that sometimes more is more.