They called themselves the Byker Chapter...

They were inseparable: six boys and one girl who'd grown up together in the back streets of Newcastle. Now the terraces are long gone, but Richard Eden has his memories - and one special photograph. All that is left of their joy - and betrayal...

Suddenly, impossibly, one by one the images begin to fade, as if his friends had never existed.

Something is stalking the Chapter - closing in for the kill. With each hideous death, another image fades from the photograph. Some spectre from the past, some horror they have unwittingly released, is out there on the darkened streets. Hunting them down.

They can run, but this time there is nowhere they can hide...

DAILY POST An awe-inspiring study in desperation and the supernatural, with excitement lasting without respite to the final page

ED GORMAN  Structured like a formal mystery that has at its centre a truly ominous secret. But even more special than the story is the writing. Laws is already unique and is destined to be major. This is a spellbinder

INTERZONE In terms of sustained tension and hysterical panic this book works, and is well grounded in its physical locations 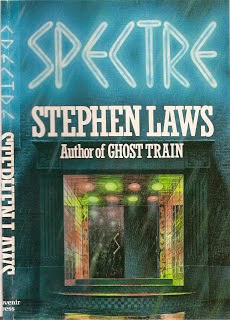 This is the first edition hardback cover, published by Souvenir Press; depicting the entrance to 'The Imperial' nightclub - where the main action (and horror) takes place. The real-life Imperial was a fleapit cinema that I haunted as a kid, just round the corner from where the Laws family lived. (Photos of the cinema will follow later). It closed for business as a cinema in 1963, but in SPECTRE, I reopened it fictionally as a night-club - so what we have here is a cross between an old cinema entrance and a disco-lit foyer. That club is actually called 'Spectres' in the novel - but hey, what's an 'S' between friends? 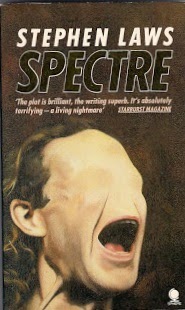 The first English paperback release (by Sphere) has a striking faceless visage from a shock sequence that features in the novel. 'Loss of identity' is one of the central themes in the narrative; with people fading and disappearing from photographs, faces not appearing in
mirrors and - as with the cover - a person's entire face being wiped away. The scene in the novel was supposed to be a shocking visual metaphor made real - and it was a very visceral surprise to see it rendered here so graphically. My original suggestion on cover art to Souvenir, and then later to Sphere, was that an exploding mirror containing a screaming face within the flying shards might be an effective cover and metaphor. They didn't go for it - but I thought that Sphere's cover was pretty damned good. 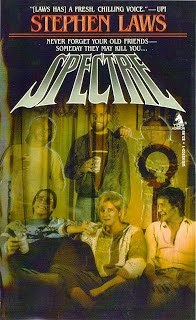 Tor's paperback publication has one of my favourite covers ever, with a special effects photograph using real actors (and actress) to depict a key scene from the novel. This is the group photograph from which members of the 'Byker Chapter' mysteriously begin to vanish one by one as they are stalked and killed by a malicious and unknown 'spectre' from their past. This was created by the great Jeffrey Potter. I was stunned when I first saw it - since the guy with the beard standing in the centre holding a can of beer is exactly how I envisaged the character of Stan 'The Man' Shaftoe. Tor did a great job with GHOST TRAIN, but I think they really excelled with this group portrait cover and its two fading images. 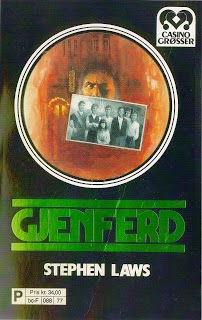 Cover from the Norwegian edition. The circular centrepiece is a cutaway on the front of the book which, when opened, reveals the complete painting and black and white 'Byker Chapter' photograph. 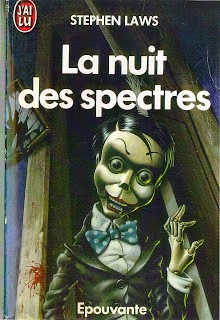 The French paperback publication of SPECTRE was retitled THE NIGHT OF THE SPECTRES ('La Nuit des Spectres'), and the cover is another of my favourites.  J'ai Lu decided to concentrate on the malevolent ventriloquist's dummy which features in the book, and I was deeply pleased with the result. I've always felt the same way about these dolls that I feel about circus clowns. They are not cute and funny. They are deeply, deeply scary. As mentioned elsewhere on the website, there are a few cinematic homages in SPECTRE - and my own creation here was an intention not only to reference the horribly creepy dummies of DEAD OF NIGHT (1945) and DEVIL DOLL (1964), but to go on to create a frenzied, possessed and murderous ventriloquist's dummy that would be difficult to forget. 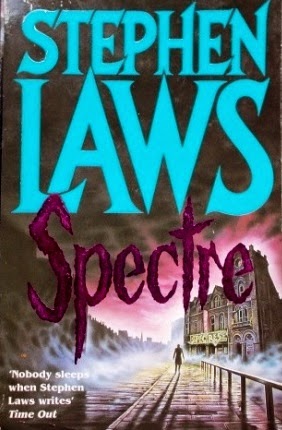 Second paperback publication by Hodder and Stoughton/New English Library. This is a stylised interpretation of Byker Bridge in Newcastle upon Tyne, with 'The Imperial' in the background (in actuality, the cinema was situated further off to the right and out of sight on Byker Bank). The artist is Steve Crisp, who not only painted this cover (superbly) but also the paintings for the re-released paperback editions of GHOST TRAIN and THE WYRM in similar style. Steve really did a wonderful job here. In fact, I loved them so much that I bought the original paintings from him and they're hanging on the Laws study wall. The lone, spectral figure on the bridge is also an excellent touch - and mirrors a photograph of yours truly which appeared in an interview in the late, lamented FEAR magazine. 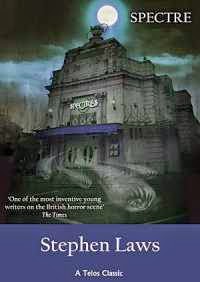 When Telos approached me about a possible, definitive republication of the novel, I jumped at the chance. Although The Imperial had been demolished a matter of days after the novel was published , it gave me a chance to write a special feature for this edition about the old cinema, the genesis of the novel, the writing of the book and a real-life strange event that happened after the book came out. It also gave me an opportunity to restore some material to the narrative that had been cut at editorial stage, to which I had conceded at the time but had always regretted. 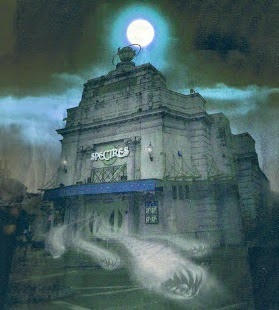 And here's the full painting for the Telos release, minus the script. To celebrate publication of this definitive edition, a republication launch took place at The Cluny, a venue nestling in the cradle of the Ouseburn Valley - the actual 'location' for the events that take place in SPECTRE. Not only did I give a talk about the novel and its creation, but also organised a tour of the locations on the night. Writer/director Steve Gallagher was a guest of honour, and kindly wrote a feature on that event for the Telos website - which will be reproduced in this section in the near future. 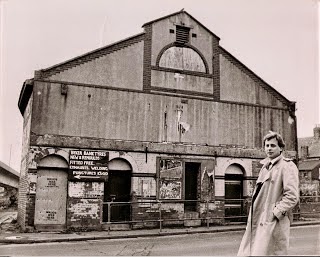 Newspaper photograph of the derelict Imperial cinema itself, only a few days before its demolition. Not quite as scary as some of the book covers would suggest, but my very own Haunted Palace. Along with Byker Library, this is where I had my first real thrilling encounters with lost worlds, ghosts, monsters and children of the night. For details of my real-life scary encounter here check out the special feature in the Telos edition. 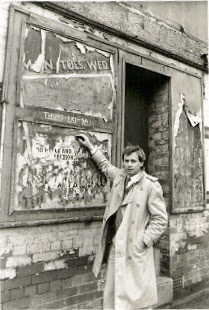 A closer view of The Imperial, and its 'Coming soon' notice board. Check out the remaining fragments. Back then, there was a double bill Monday to Wednesday, another double bill Thursday to Saturday, a kids' matinee on the Saturday afternoon - and a 'For One Night Only' on the Sunday (usually horror). The Laws family lived just behind the cinema. I could be home via the back exit in about 40 seconds. Some weeks it might have been easier for everyone if I'd just moved into the cinema and lived in a tent in the back row. 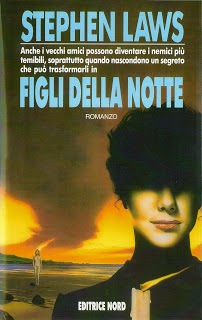 Talking of 'Children of the Night' above - here's the Italian edition of SPECTRE under that very title ('Figli Della Notte'). You'd be forgiven for wondering just where in the novel you'd find a sequence that involves a woman walking along the beach with her hair on fire - since there's no such sequence. I was advised, although I've never had this properly confirmed, that European editions of novels often used pre-existing artwork from available sources - legitimately - for book covers, and that this is an example. Despite the fact that it doesn't relate to the narrative at all, I've still always liked its striking, dreamscape effect. Hardback Italian edition of I FIGLI DELLA NOTTE, with artwork by E. Musciad. Having Medusa The Gorgon on the cover is a bit of a spoiler for the plot, with the first murder victim in the novel watching a clip from Hammer's 1964 movie THE GORGON on television when something nasty happens to him. There was some consternation about the nastiness of the murder scene in the original manuscript, and I agreed to tone this down for original publication. However, I wasn't completely happy about that - and so reverted to the original text for the restored publication by Telos,which can now be read in all its gory glory in that edition.(Frankly, I still don't think it's that gory - but I leave readers to judge that for themselves). 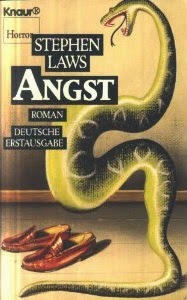 And finally, cover art for the German edition of SPECTRE. It took me a while to work out that the snake has swallowed someone here - and left the slippers behind. I don't recall a scene like that appearing in the novel. But hey - what the hell do I know? I'm only the author.

Further covers to follow in due course, plus related articles and material.