There's a delicate balance in creating a 'suspension of disbelief' when writing a supernatural horror-thriller novel. To really establish any kind of believable supernatural threat, then it's vital to develop that threat against the background of completely 'real' situations, with real characters living real lives in the real world. Without that backdrop, it's impossible to seduce a reader into believing the threat when it eventually emerges. Research therefore becomes a vital component in creating that sense of reality, more so perhaps in supernatural fiction that in any other genre. That's why I've always taken the research elements of my novels so seriously. That commitment to research really got me into hot water (or I should say 'foul water') when I was researching my seventh novel - MACABRE.

A friend of mine, a marine biologist, asked me if I was working on anything at the moment. Normally, I'm reticent about discussing burgeoning ideas. But what the hell, we were both at a mutual friend's wedding reception, the booze was flowing and the atmosphere was great. So I told him that I was working on a new novel, but needed some research on what it must be like for police divers having to search for missing persons in canals. My pal was quick to bite. Next time we came to stay with him, he'd arrange for me to go on a controlled 'dive' at the local swimming pool - all decked out in the scuba gear. We'd both go in, and he'd put tape across my face mask. An experienced scuba diver himself, he'd met and discussed just such working methods with police officers before. It was literally a case of not being able to see more than three or four inches in front of your face, and having to do everything by touch. If I was game, I'd find out for myself just how claustrophobic it could be. Was I game? Hell, yes. There at the wedding reception, full of good whisky, I was certainly game for anything.

But when we arrived at his house a few weeks later, I was less than sure. Particularly when he met us at the front door with his left foot swathed in bandages. He'd sprained his foot playing football and couldn't go on the dive with me. Also, it was Sunday - and the local pool was closed. Ah well, maybe some other time ... But it didn't present a problem, apparently. He had made different arrangements. That latter statement was made with a certain twinkling of the eye. Now in the course of researching numerous short stories and novels, I've learned among other things how to drive a locomotive (GHOST TRAIN), and how to climb an elevator shaft (DARKFALL). It may be that such research seems to present the researcher in a macho mode and maybe what followed - just maybe - was a test to find out how tough these so-called horror writers are.

On Sunday afternoon, I was taken down to one of Stockport's canals and kitted out in a scuba suit. My wife stood by, watching anxiously, as I suffered my first claustrophobic attack just wearing the suit. The tanks on my back weighed a bloody ton, and I felt sure they'd send me straight to the bottom, full of oxygen or not. I don't know if you're acquainted with Stockport's canals. But the one I faced was composed of two thirds effluent and one third excrement. I stood there, looking at the 'water' like some rubber monster from an episode of Dr Who, sucking in air through the aqualung and sounding like Darth Vader. A guy out for a run along the canal side passed me with a great grin on his face, and with a thumb's up sign. We both knew that I looked like a complete dork.

With the rubber balaclava on, it was impossible to hear what my 'friend' was saying to me so earnestly. What he actually said was: "Now, just lower yourself over the edge of the canal, down into the water. Then stand up, get used to breathing through the aqualung - then slowly sit down in the water and let it come up over your head." But what I thought he said was : "Okay, off you go then!"

So, not wanting my cowardice to show, I did just that.

I plunged directly into the canal, sending everyone into shock.

There were weeds up ahead. Weeds?! Growing in this water? As I floundered through them, they entangled in my legs, slowing me. Suddenly, I was upright, looking at the air bubbles bursting on the surface about a foot above my head. The weeds had slowed me, but now they had dragged me down and I was sinking. In a matter of seconds, I was knee deep in the sludge at the bottom of the canal. And now, as I raised one foot to pull myself out, the other seemed to sink deeper. This was it! A newspaper headline flashed before my eyes:

'IDIOT HORROR WRITER KEEN ON RESEARCH ENDS UP DROWNED IN SHIT.' "I KNEW IT WOULD END LIKE THIS," SAYS DISTRAUGHT WIDOW. "IF ONLY HE'D WRITTEN NICER BOOKS THIS WOULD NEVER HAVE HAPPENED."

Suddenly, I could feel something under one foot. God knows what it really was, but it felt like a chair without the seat/cushion in the middle. I braced my foot on it and shoved. Thank God, it propelled me out of the slime to the surface. After thrashing around trying to get my bearings, I headed back to the canal side. Floundering to the side in record time, I hung on the concrete lip, trying to calm my breathing.

When I looked, my left hand was pumping blood from a cut across the palm. I'd obviously slashed it on whatever it was that had helped me to escape from the bottom. What a beautiful, glorious sight. Well, I wanted to carry on in the canal, didn't I? But ... you know, with that hand and everything, I'd just have to get out of the water, get it seen to straight away. Oh dear, what a shame.

I'd been in the water for about eight minutes.

Ever had injections for Weill's disease? It's a nasty infection, potentially fatal, caused by rat's urine. Naturally, canal water is full of it. Tell you what - I'd rather have a hundred injections for that than go back into a canal again.

So there you have it. Macho horror writer reduced to quivering wreck. Now why is it that whenever I tell this story at conventions, people just fall about laughing? 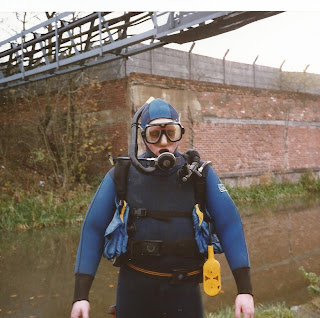 And here's the evidence. Recently rediscovered photo of the author prior to 'The Plunge'. Zoom in close to the face-mask. Blurry though that is, you may see real terror. If there'd been a photo of me climbing out of the canal at the end of the 'research', you might see something - despite the injury - like real 'relief'.